Where Has the Time Gone?

A blast from the past! 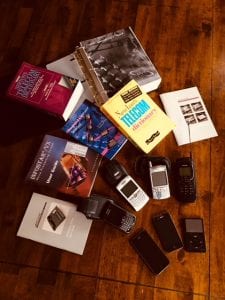 Yea, that’s a collection of old cell phones including my first “smartphone” – the Palm Treo 650 (circa 2004). You’ll also notice some old Executone admin & user guides, along with a couple editions of Newton’s Telecom Dictionary from the 1990’s.

Wow! A lot has happened since then.

But this post isn’t about me. It’s to help you recognize the need to stay current with technology. And that’s what cloud-based phone systems allow you to do.

Imagine still using that Nokia 2180? (Yea, the one with the telescopic antenna – circa 1998)? Not only would it be incredibly inefficient to use, old hardware and software poses potential security risks; not to mention surprise failures and reliability issues.

Or how about using one of those 1990 telecom dictionaries? That’s hilarious because today’s technology was barely a concept back then. In fact, voice over IP (VoIP) didn’t make it into print back then. The only “voice over” mention was a description of a feature to interrupt another user’s phone call to voice announce over their speaker – haha!

For old time sake, I had to take a look at those dictionaries. By the way, the ’93 edition was twice the size of the 1990 version, and a little thicker than an old-school Yellow/White Pages directory. Yikes!

Here are just a few of the items listed:

So now that we’ve taken a stroll down memory lane, what’s the point of this post?

If your business is relying on an old phone system, it’s likely to be doing you more harm than good.

Surprisingly, many of our clients discover that the cost for installing a new cloud-based phone system isn’t even close to what they were expecting.

Most times in fact, there’s little to no additional monthly cost… and sometimes, your monthly cost becomes significantly lower.

It doesn’t get much better than this…

So lose the excuse and take a closer look. You’ll be happy you did.

IDeACOM is here to help…

You have Successfully Subscribed!